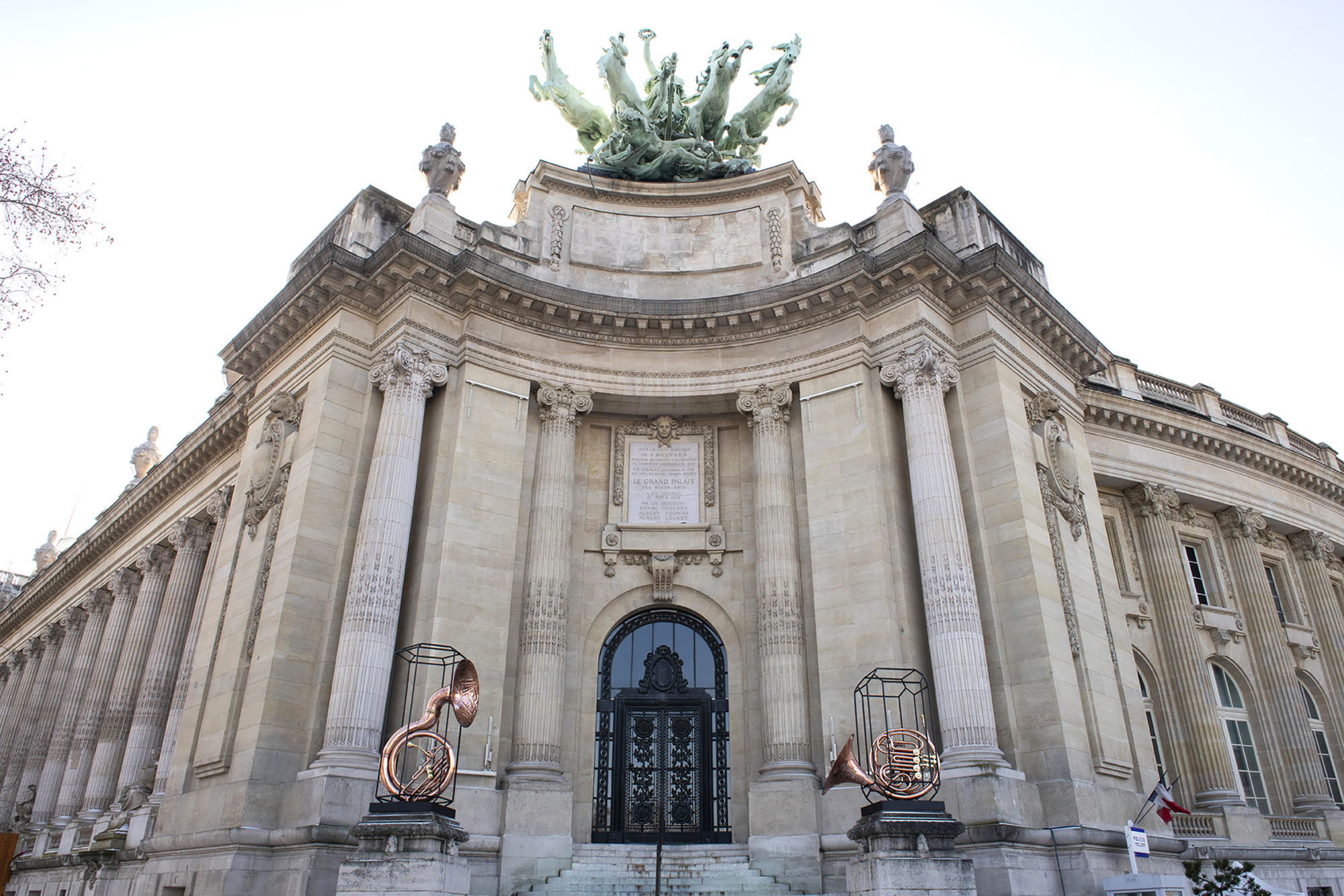 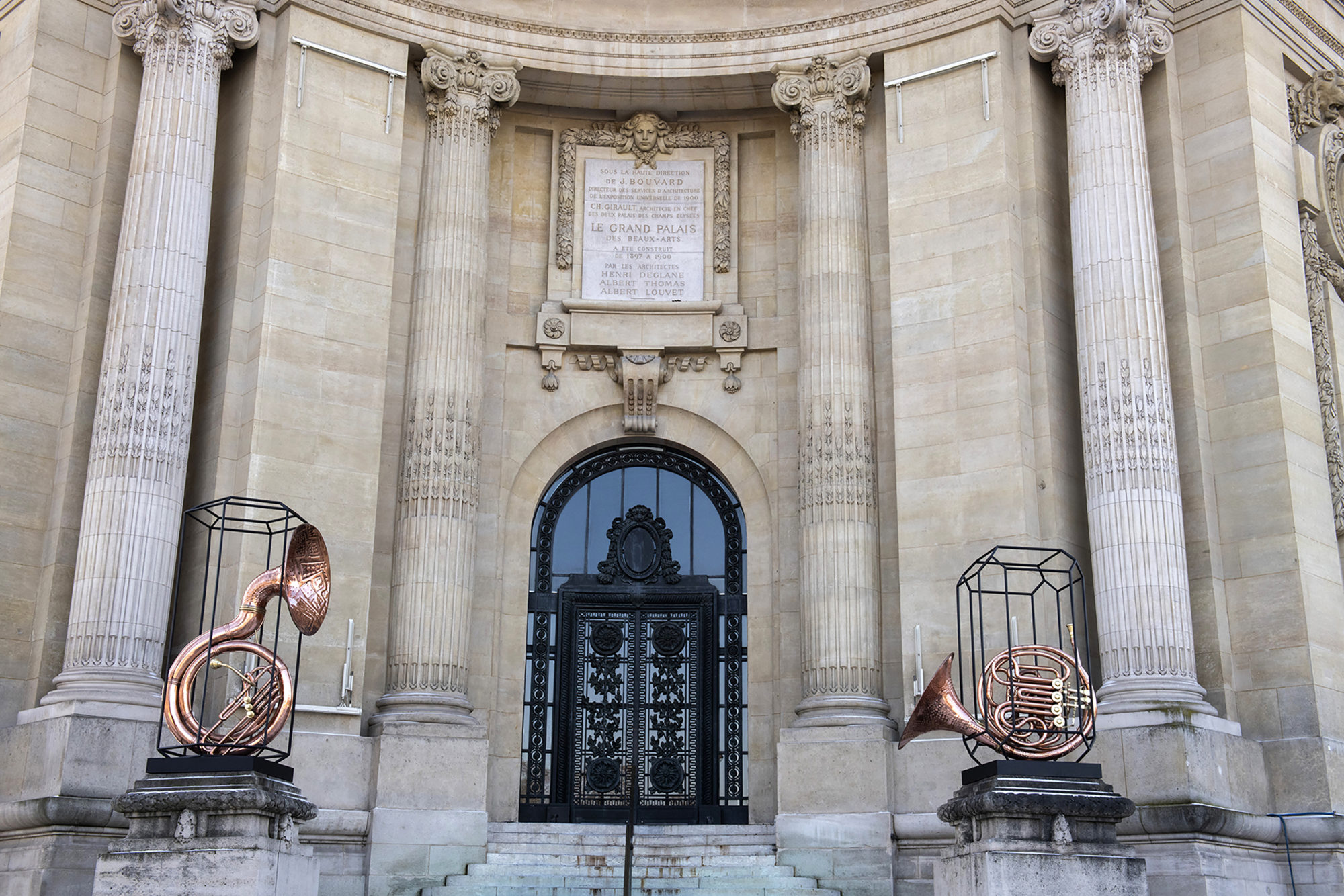 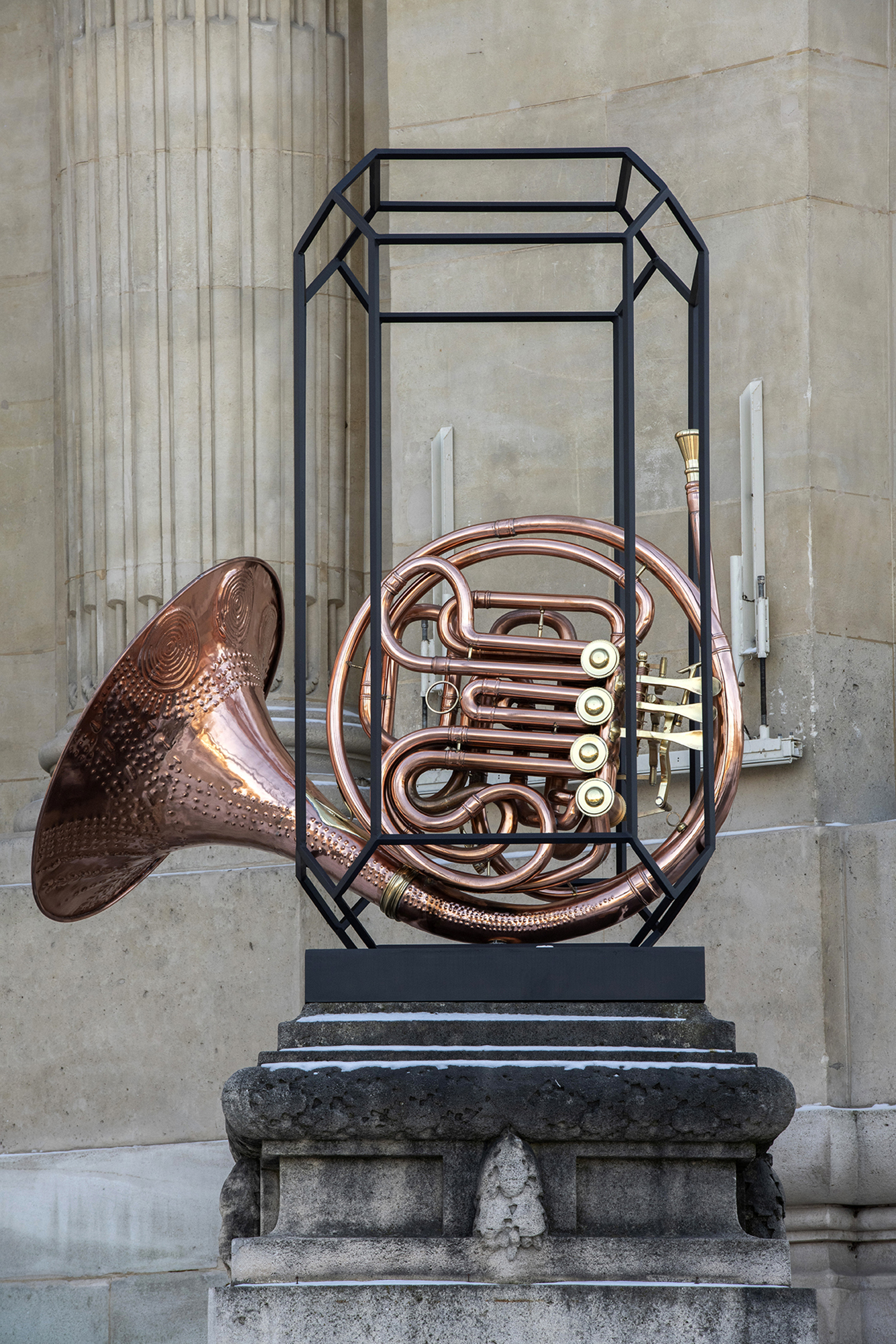 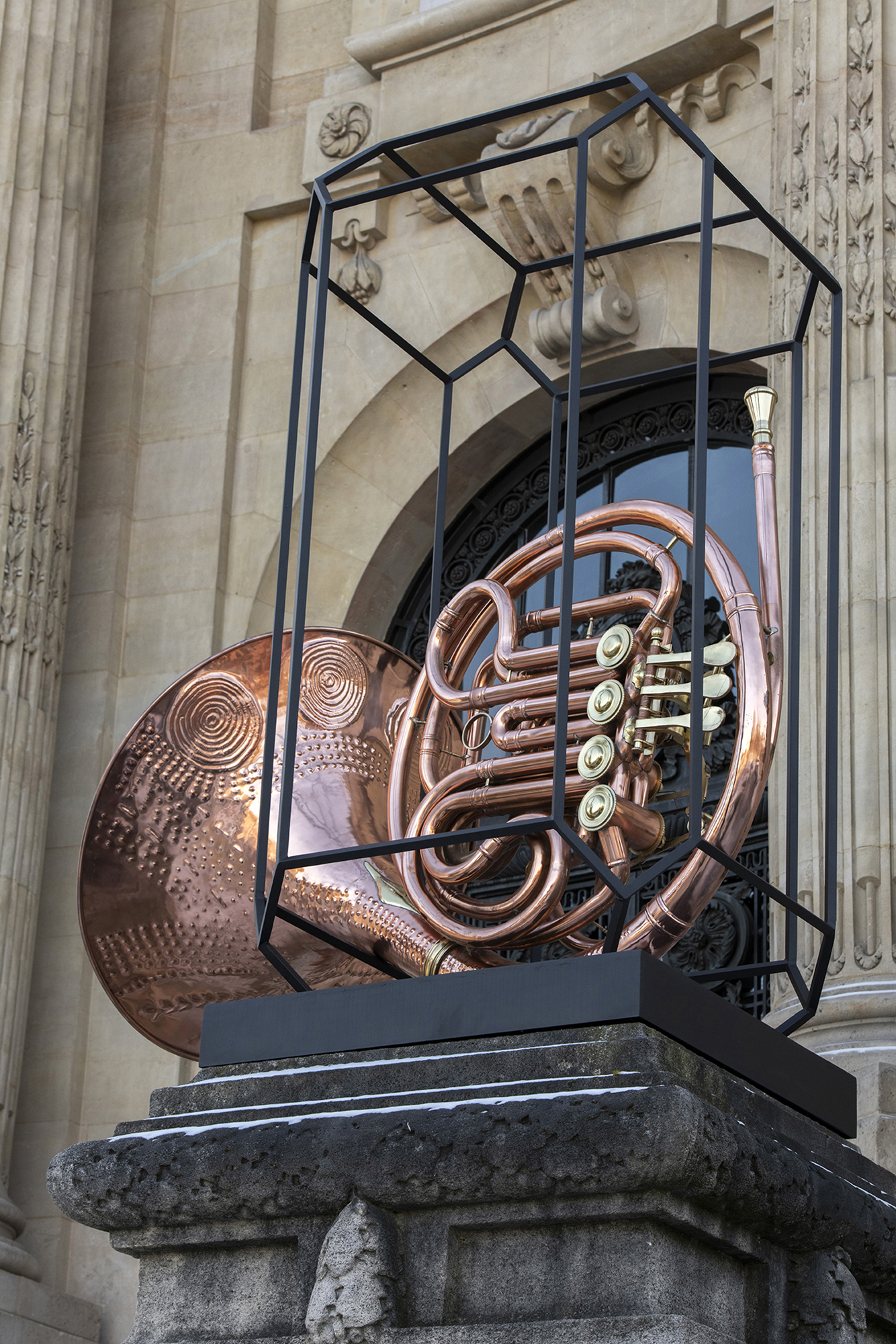 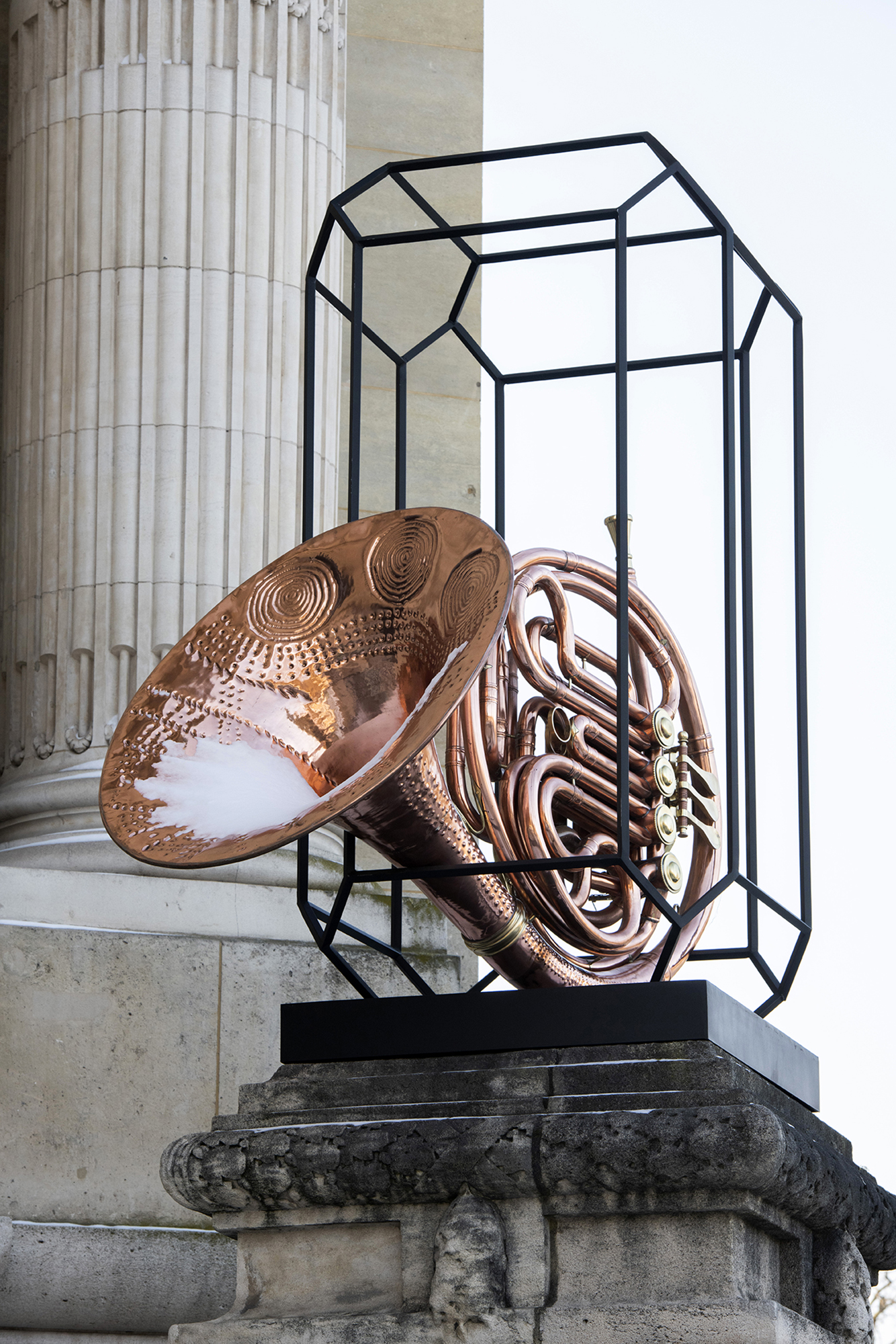 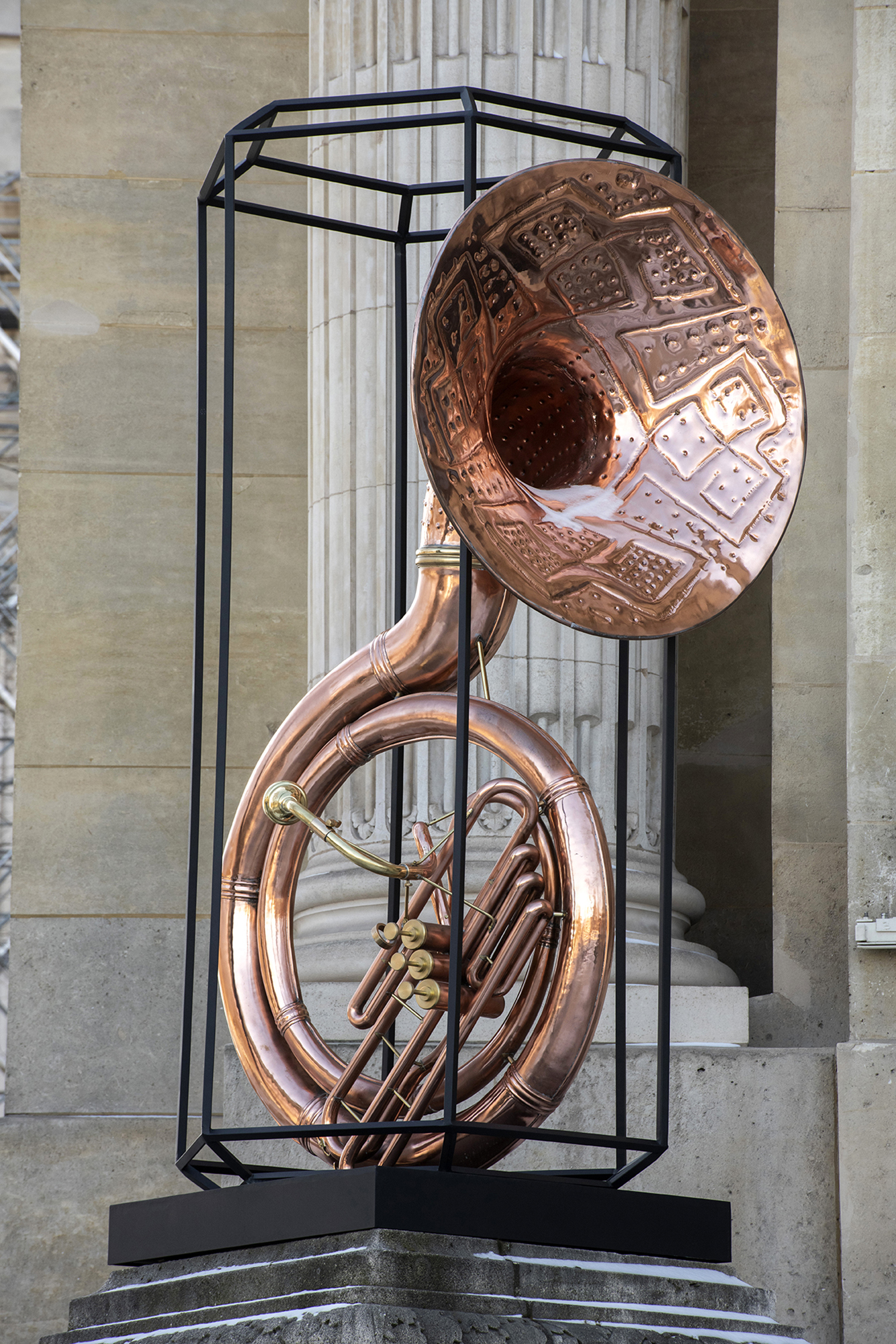 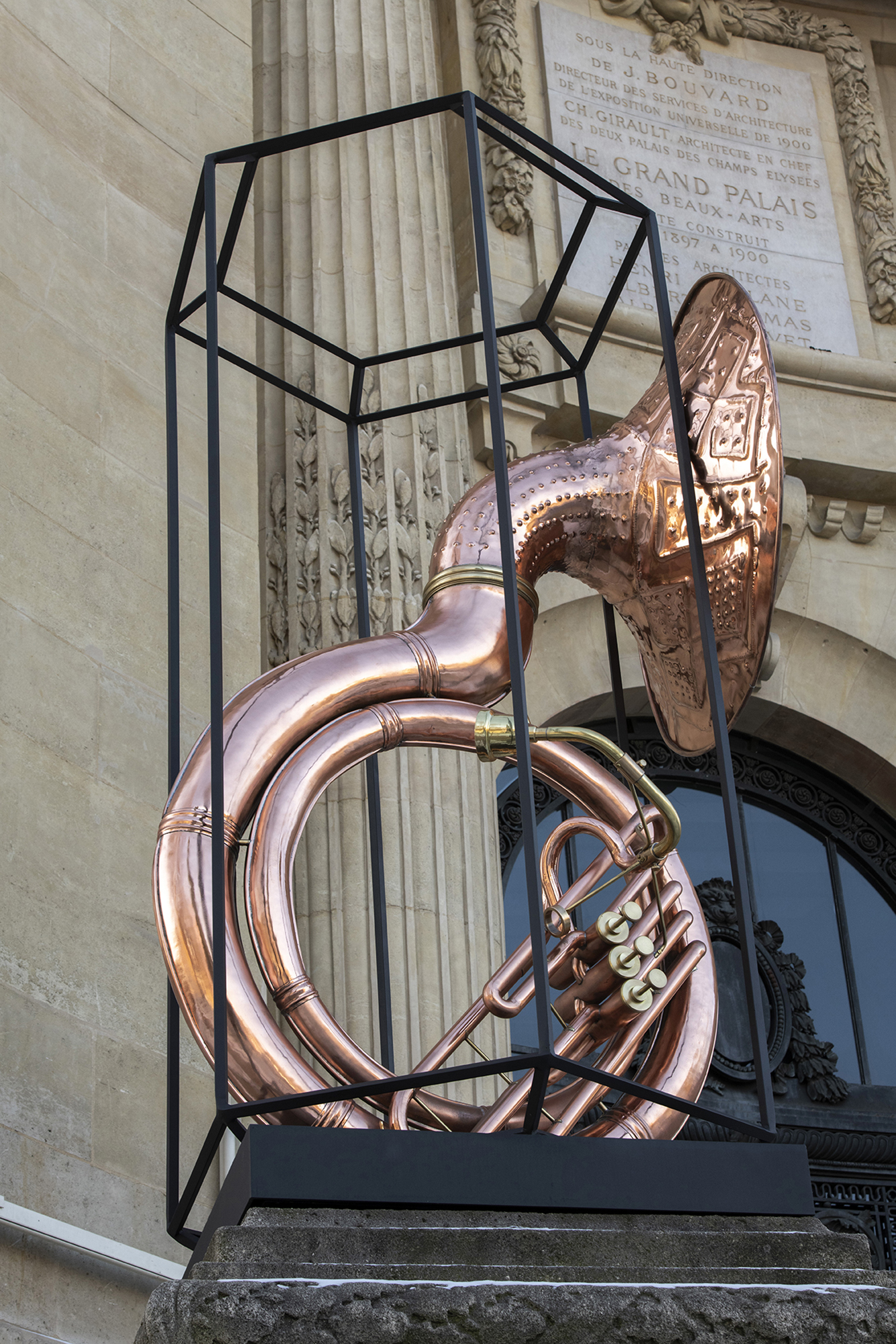 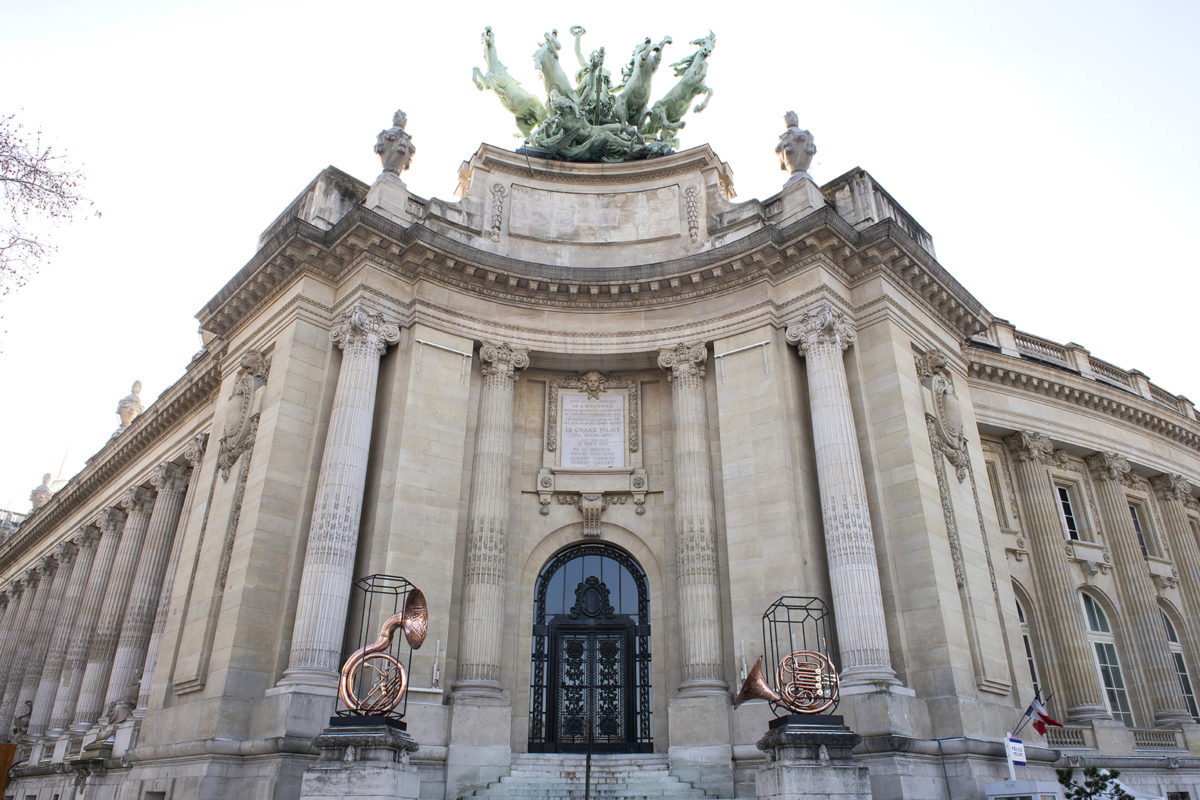 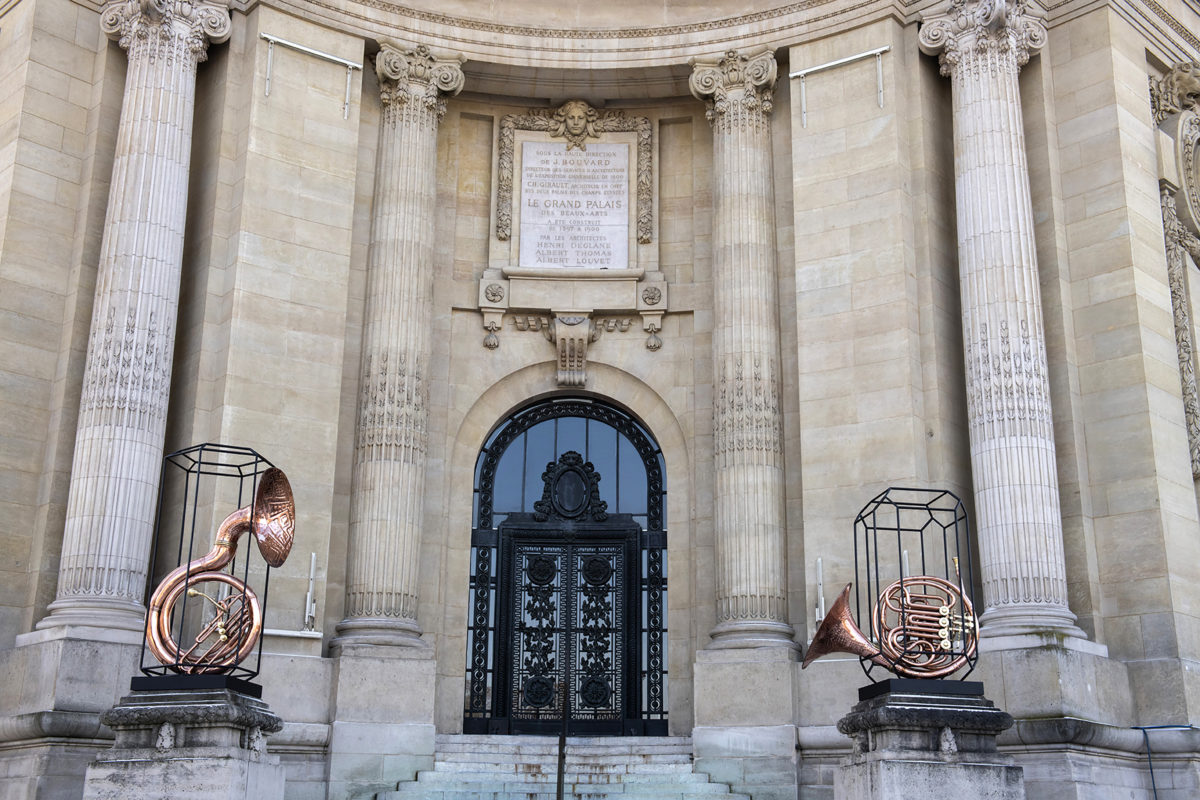 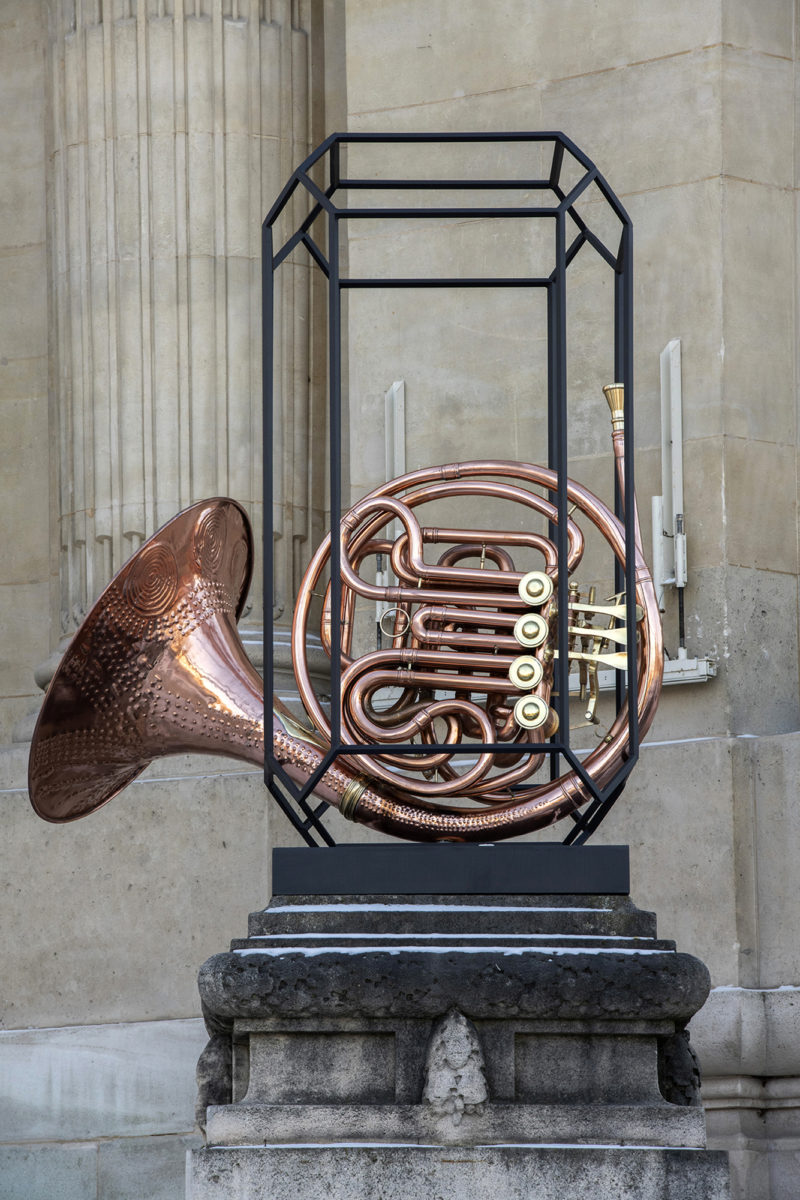 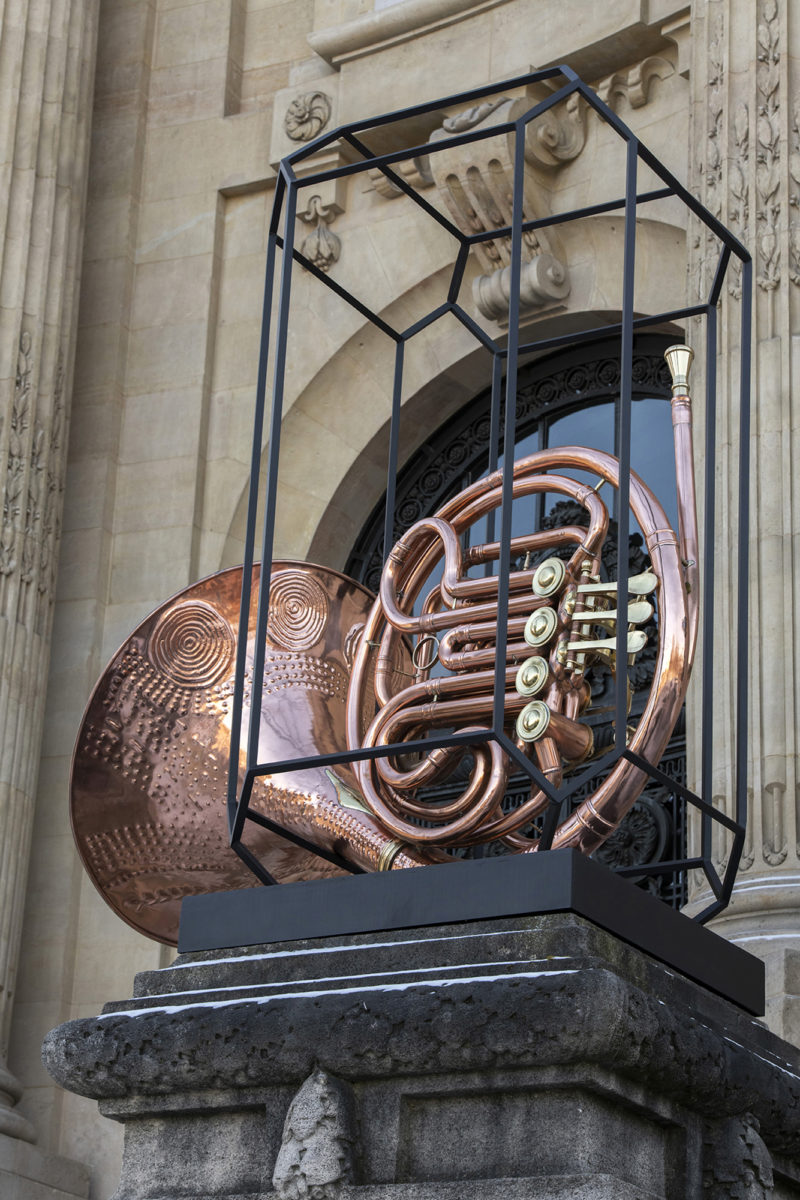 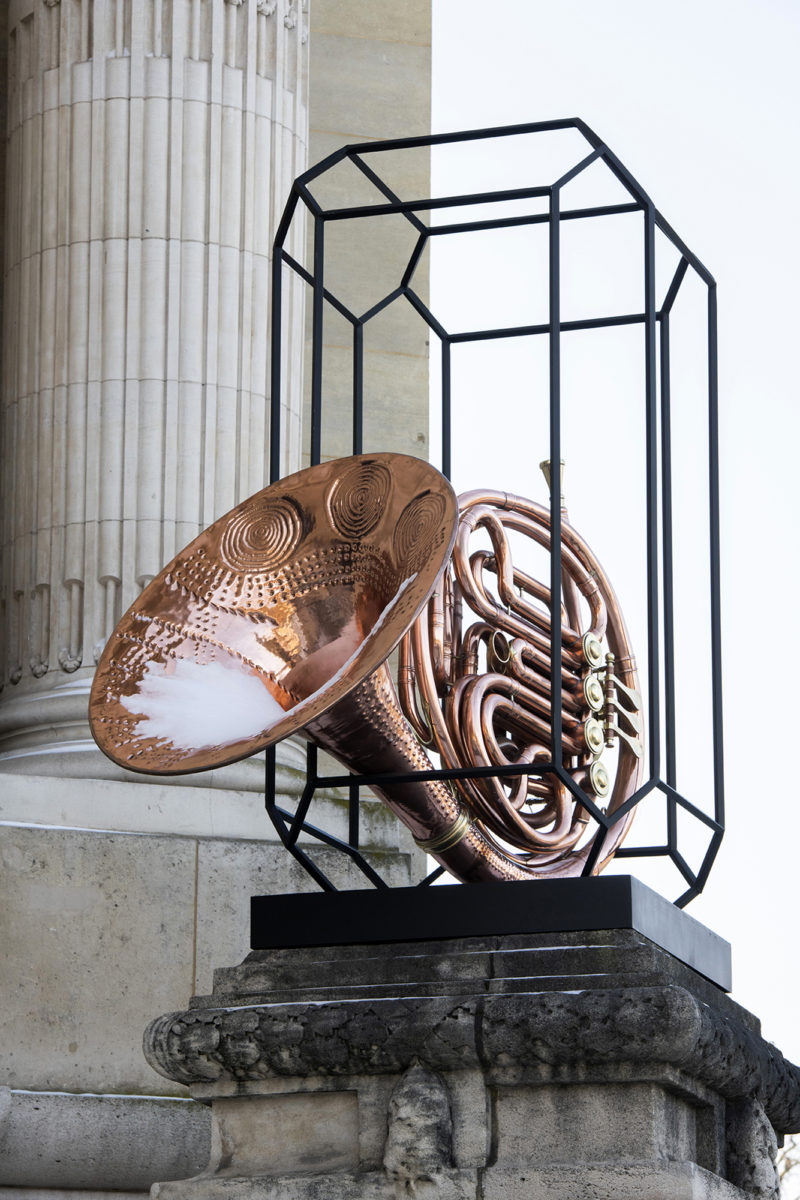 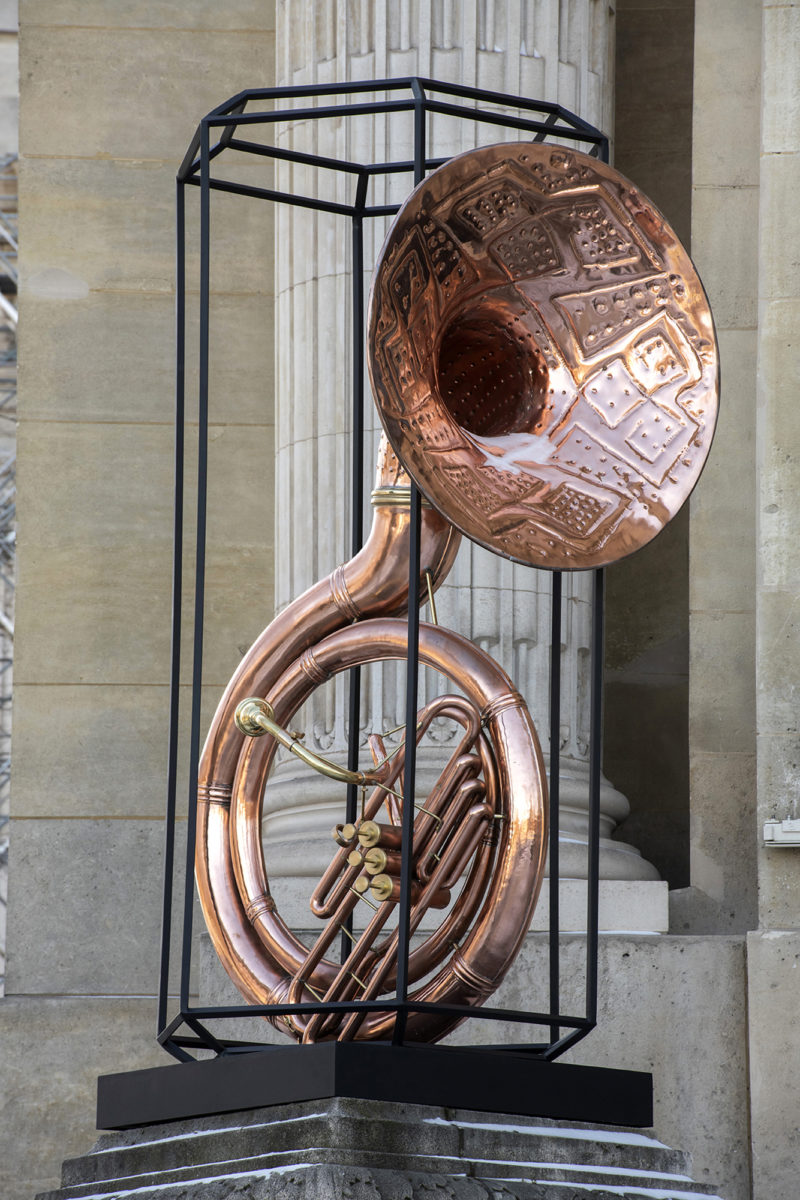 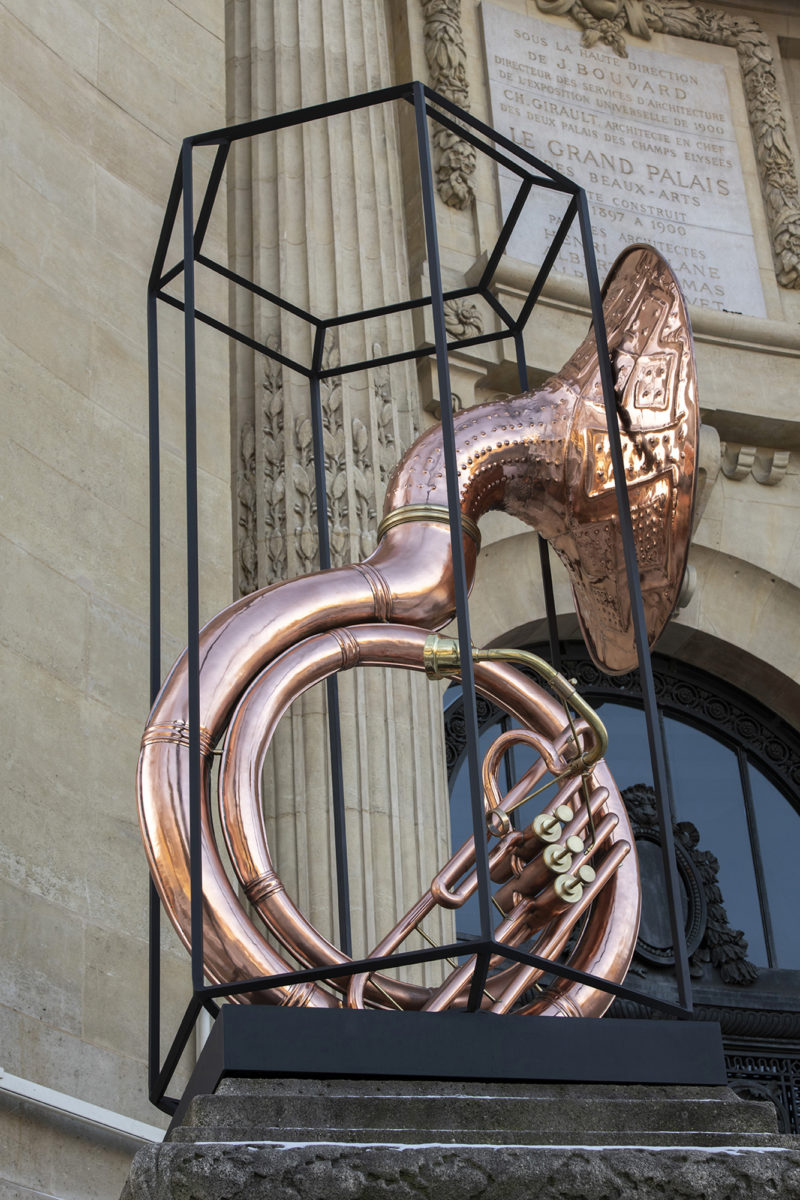 Invited by the Rmn – Grand Palais, Sammy Baloji has created two exceptional sculptures for the pedestals of the Clemenceau monumental stairway at the Grand Palais.

A text was commissioned to the writer, curator, essayist and art critic Simon Njami, titled: “The accidental encounter of a sewing machine and an umbrella on a dissecting table”1:

Memory is like stagnant water in that it can only operate when activated. Such activation is neither factual nor historical. It is triggered by another mechanism, a shock such as the image of the “accidental encounter, on a dissecting table, of a sewing machine and an umbrella” proposed by Lautréamont. In the present case, let’s imagine for a moment that the “umbrella” is the colonized person, the “sewing machine” the colonizer, and the “dissecting table” history. Indeed, colonization was this radical fracture that modified the memory mechanism of those who endured it. It is a fracture in the sense that an external memory was superimposed on the original memory. The result of the encounter is that everything, including certainties, becomes muddled because the memories of all the actors involved in this drama have become an intractable jumble. Memory has become a ruin on which all kinds of subjectivities can be projected. There, there is no lost paradise or theory of origins, but only imaginary constructs. And when one embarks on a re-construction effort, as Sammy Baloji does, it is not to build something identical (which is impossible) but to pave a new form of representation. “I think I had the idea of the two sculptures because I needed to question history. How do we represent representation and what mechanisms do we create to speak about it? Is representation merely human morphology? What are its underlying writings, in other words its identity mechanisms?”2

That is the essential question the artist was faced with when he was about to accomplish a memory act that would represent. As he has said, he understood at once the limits of figuration that are often attached to this type of object and the importance of metaphorization. Come to think of it, it obviously operates on several plans. The first is the material chosen to embody his concepts, i.e. copper and music. Copper has a double meaning. As any musician would confirm, it refers to a category of wind instruments (brass instruments), but it is also a raw material that was exploited for a long time in the Congo by local people who were practically enslaved. The music is that of the brass bands that appeared in New Orleans in the early 19th century and were particularly thriving in the Congo Square neighborhood. “The idea was to find an interesting element that could provide a temporal analysis that would go beyond a mere intervention on the Grand Palais’s empty pedestals. I wanted to refer to the history of these brass bands, which I discovered through the archives of William Shepard, an African American missionary who arrived in the Congo in the 1890s to contribute to the emancipation of his Congolese brothers. But what I found to be even more interesting is that Shepard also created a brass band movement in the Congo, and I found an image of a group of Congolese musicians with drums and saxophones.”3 We are here at the center of what Pierre Verger called the “ebb and flow”4 , i.e. the way history goes back and forth and revisits in cycles the meaning of the values and symbols it carries. Baloji would agree with me that the trigger was not so much the discovery of Congo Square, which could represent a fictitious Africa, than this archival image of Congolese people marching with drums and saxophones, thus imprinting on the local culture an external element, which comes back with a boomerang effect. The Kimbanguist Church, to mention the most famous Congolese church, immediately seized this phenomenon that combined aspects of celebration, funeral and military organization.

Unwittingly enacting Jean-Paul Sartre’s thinking, Sammy Baloji has, through a phenomenological shift, given a conscience to an object that would otherwise have appeared trivial. “Image is the way in which an object appears in consciousness, or indeed a certain consciousness gives itself a certain object.”5 Isn’t it the best definition of history considered in its full subjectivity? Isn’t it an illustration of our unique experience in front of an object that, mixing multiple references, suddenly becomes a polysemy? We cannot reduce history to the obviousness of its manifestation, but to the subjectivity of our gaze, says Sammy Baloji through this public artwork. Baloji’s work is a mise en abyme that combines contradictory discourses. These two “brass”, which upon closer inspection reveal scarifications, are placed in metal cages that refer to the scientific expeditions of the colonial era with their cabinets of curiosities, dreams of universalism, international exhibitions and anthropological and botanical “discoveries”. Placed on the stands of a “palace” (le Grand Palais) that was built for the 1897 Universal Exhibition, these works mock the setting in which they are displayed. This pavilion, which in a way was erected to defend other territories, tells us that what seems to be obvious always seeks to go beyond its framework and that it is difficult to constrain an object. An object is not limited to its appearance. It tells the story of a history, the story of an accidental encounter and also, as Ernst Bloch wrote, “the last possible self-encounter, in the darkness of the lived and perceived moment, in the absolute question of the We.”6

4 Pierre Verger, Trade relations between the Bight of Benin and Bahia from the 17th to 19th century, [1968]

6 Ernst Bloch, The Spirit of Utopia, [1923] (Note: the translation from French is ours)

Sammy Baloji has also invited Mo Laudi to create a playlist in conversation with his works.