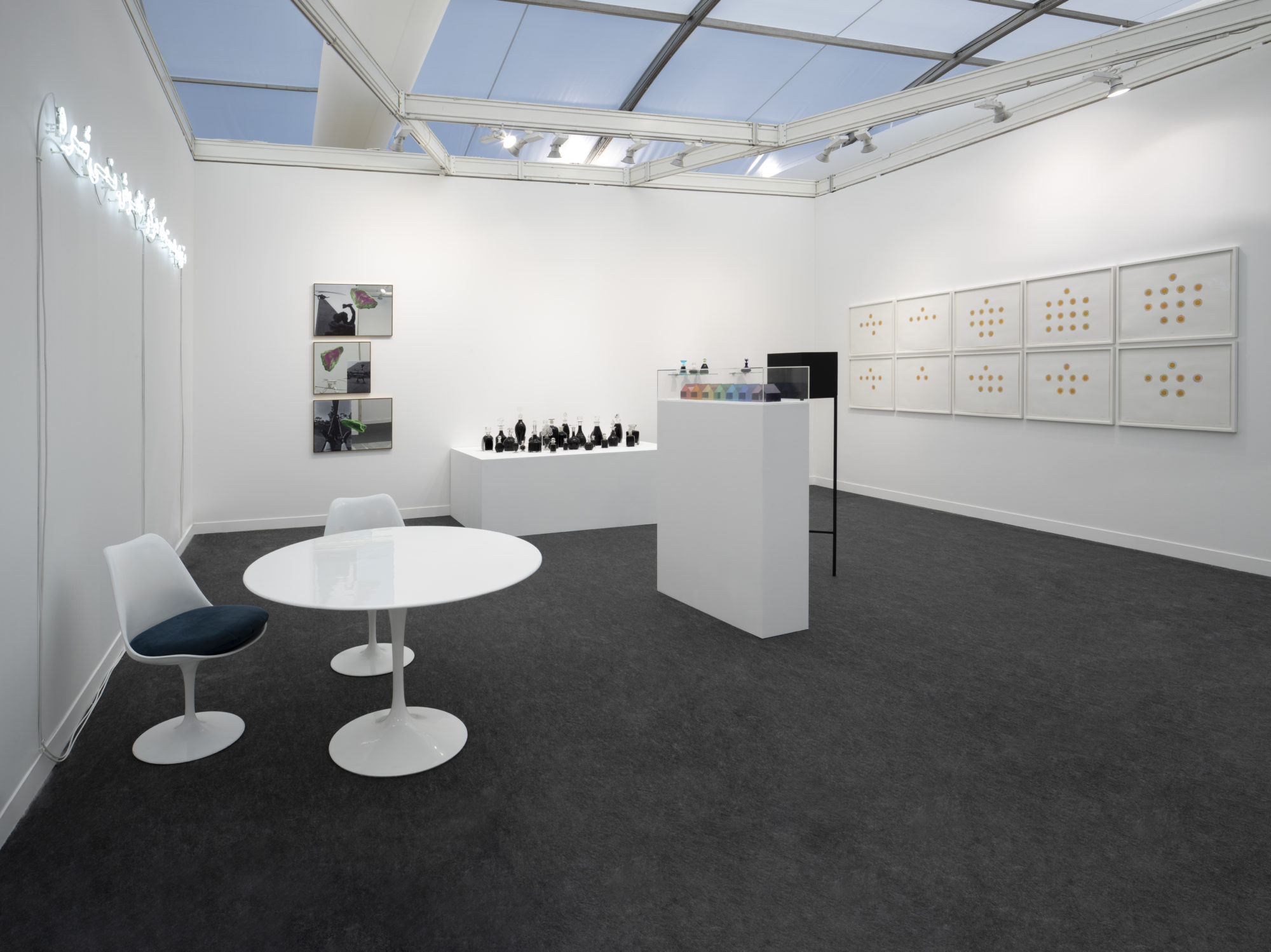 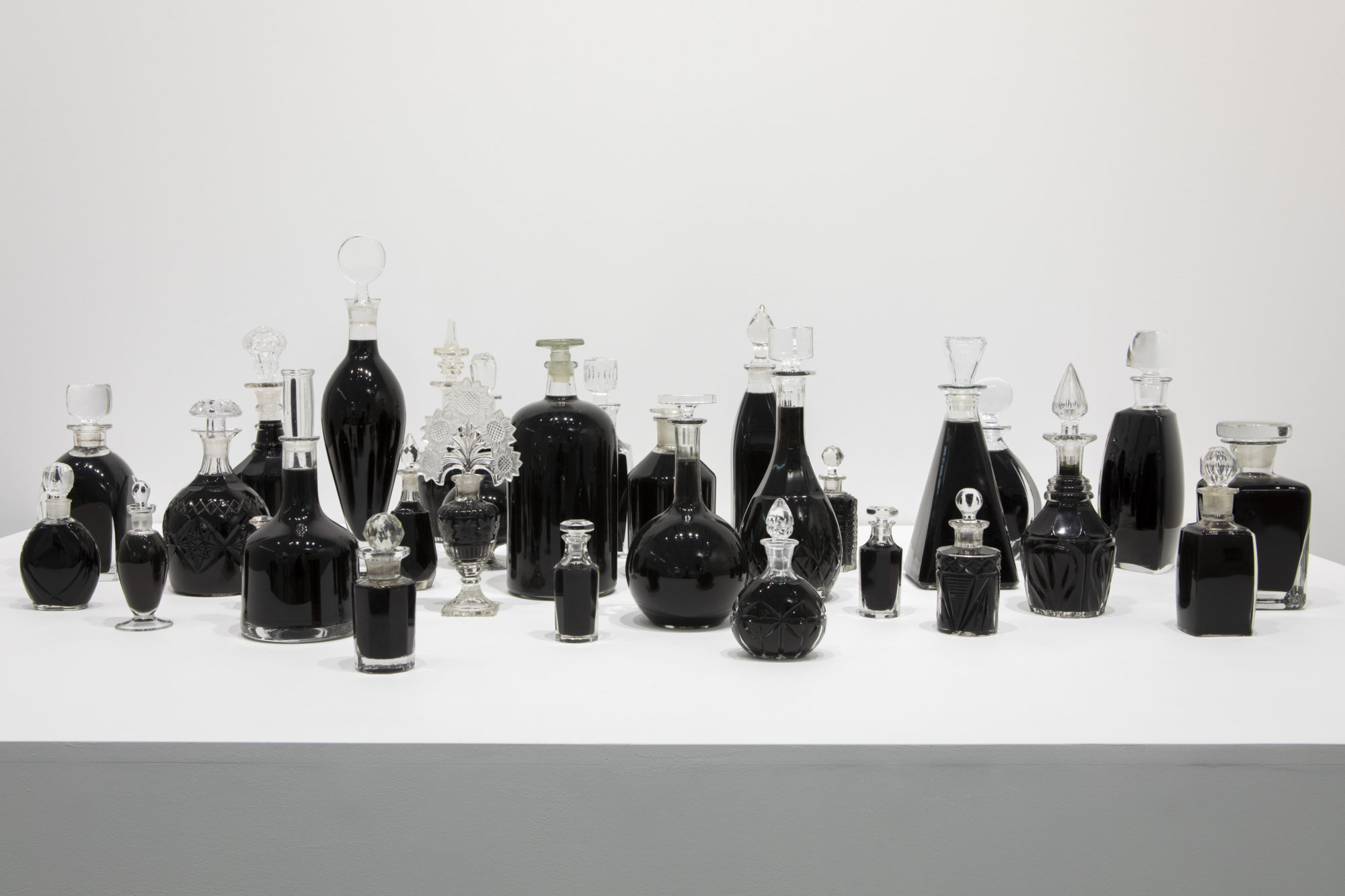 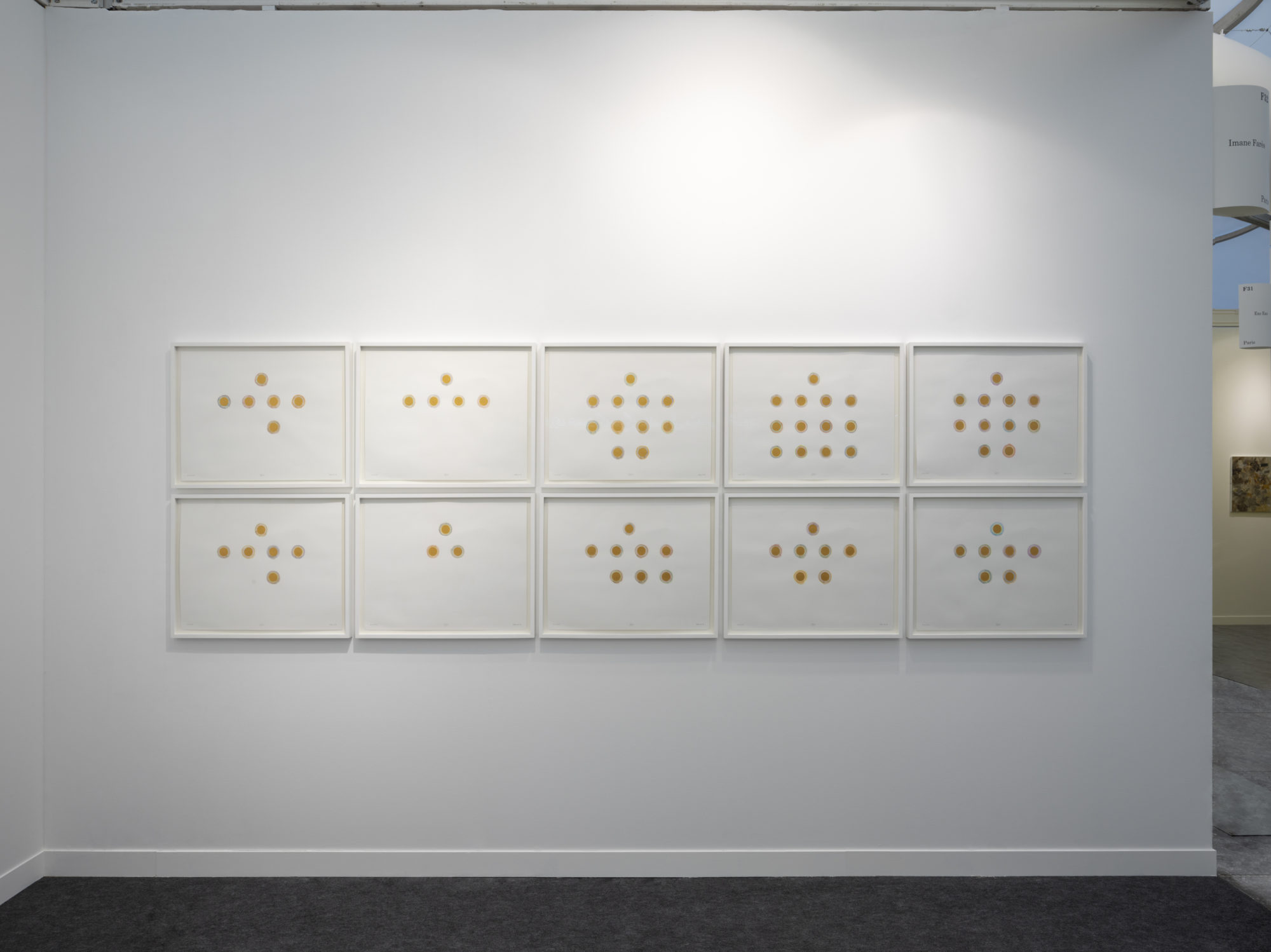 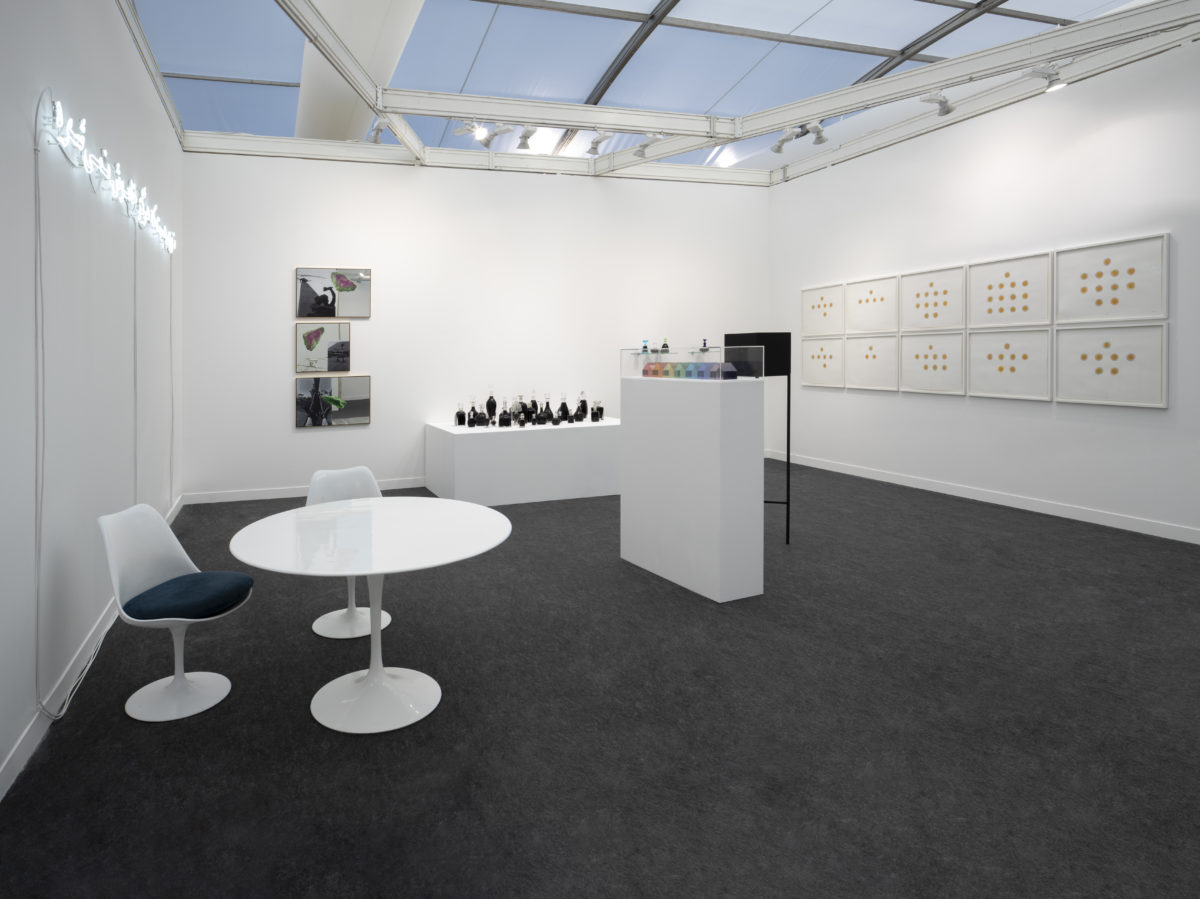 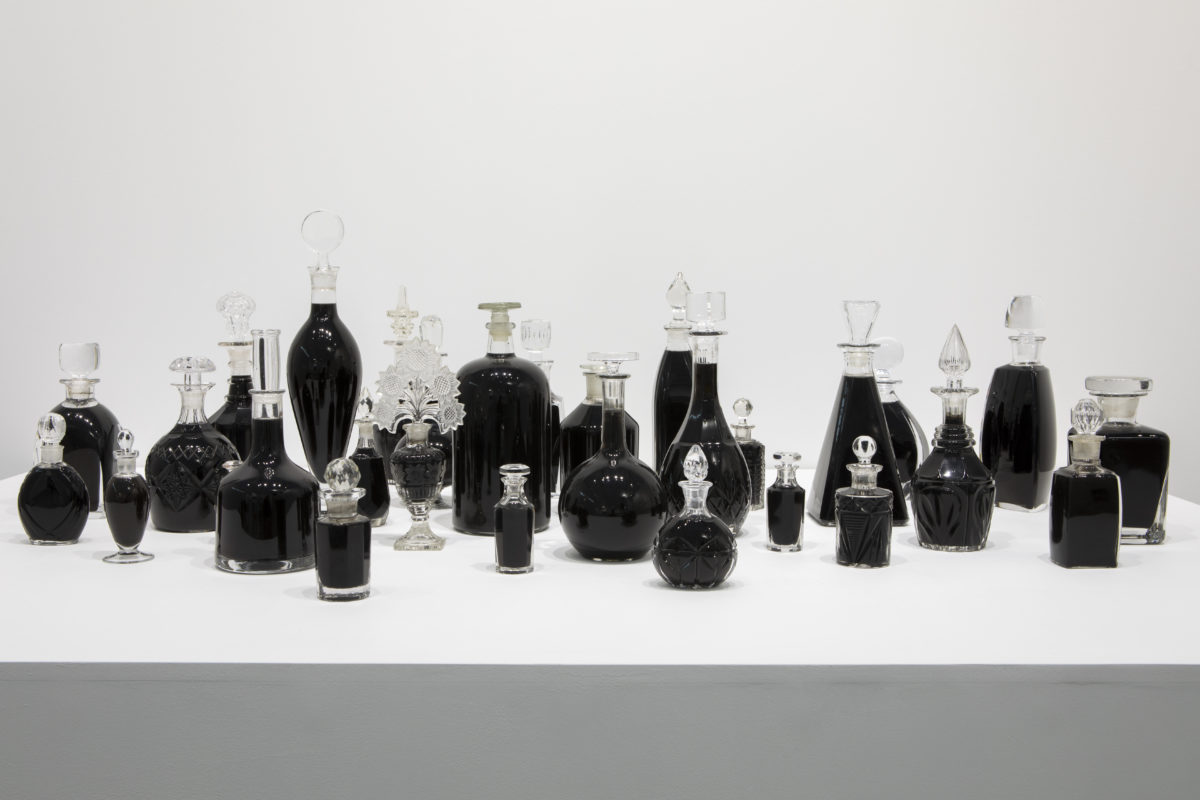 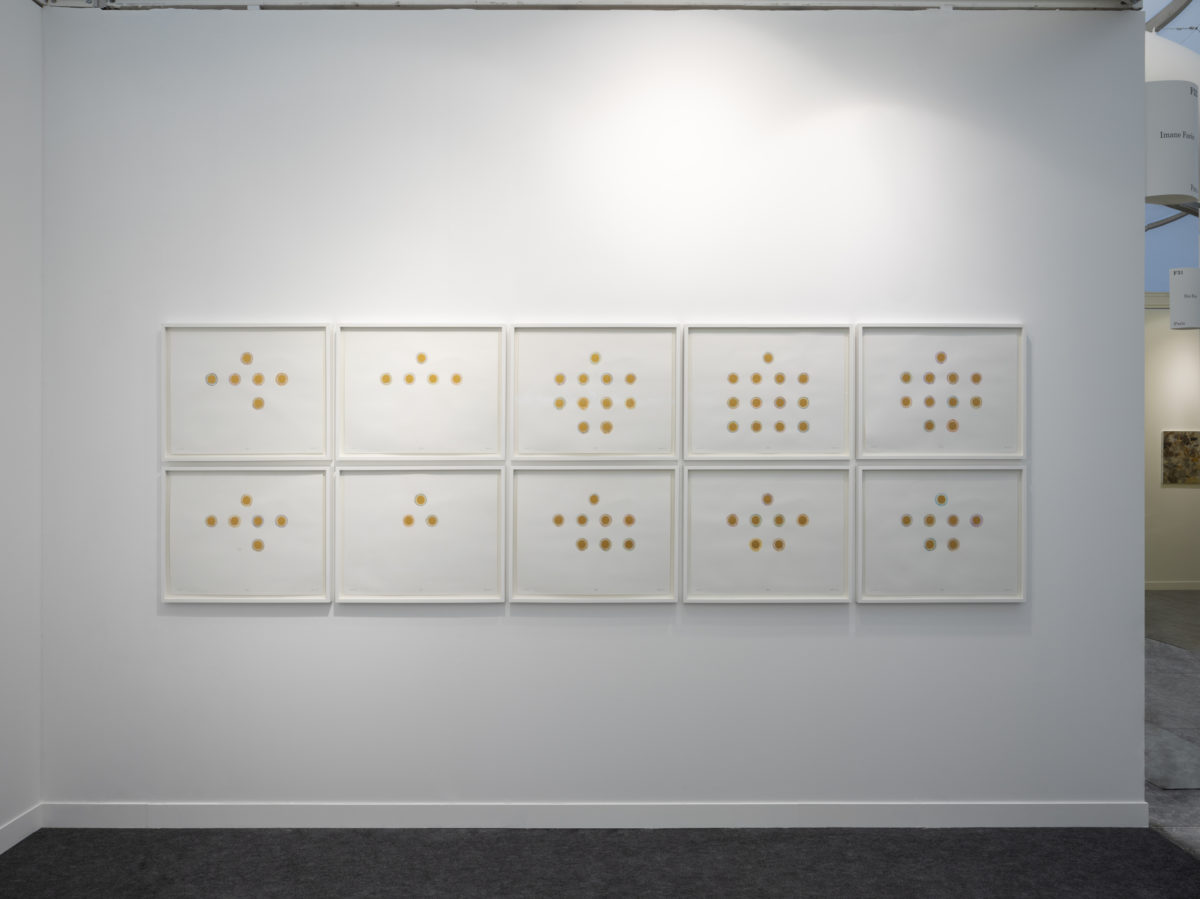 For its fourth participation in Fiac, Imane Farès is delighted to present a selection of works by Sammy Baloji, Younès Rahmoun and James Webb. Each of these artists’ plays with materials that are highly sensible to light, allowing for formal, conceptual and poetical unexpected resonances, echoes and reverberations.

Younès Rahmoun employs basic geometrical shapes and archetypal architectural forms as metaphors for spiritual reflexions. His works often involve meticulous protocols and visual tricks that play on fluctuations of light, volume and geometry. Manzil-Tayf is composed of seven small houses, each in one colour of the rainbow, thus forming a spectrum. They evoke, according to the artist, “the body inhabited by light”, a conception linked to his religious beliefs and identification as a practicing Muslim and an enthusiast of the Zen philosophy. This spiritual breadth is informed by his personal beliefs, namely the idea of being at peace in one’s body and one’s home. In Tâqiya-Nôr, a set of ten drawings, the gold circle and the vivid halos surrounding them are reminiscent of the iridescent light that often emanates from his sculptures and installation. As poetic objects, these imaginary constructions repeatedly employ numbers that are highly significant in Islam, such as 7, 10 and 77, which also structure these drawings.

James Webb often subverts objects, techniques, and forms from their original contexts and uses, by introducing them to different environments. In I do not live in this world alone, but in a thousand worlds, he displays glass vials of different shapes and colours and transforms them in receptacles for the dark liquid residues of selected texts (transcribed with ink and dissolved in water). The bottles thus enclose philosophical medicines and poetic potions. In There is a light that never goes out (Farsi) the title of the 1986 song by The Smiths is translated into Farsi and cast into neon. The phrase lends itself to infinite interpretation depending on its reception while being a bright reminder for the band’s notorious stance against all forms of budgetary, cultural or racial restrictions.

In Sammy Baloji’s digital collages printed on mirrors, a new technique employed for this new series, Sammy Baloji associates ethnographic photographs from the 1930s with scientific images generated by X-Ray scanner of various objects and stones from Congo. Here the mirror discreetly references divinatory nkisi figures, which place viewers in front of their reflection, as well as placing viewers in front of their own reflection, in the present.